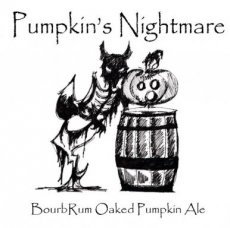 Malcroys Brewing's take on a pumkin ale.  Loads of cinnamon but with a dry end to keep the beer a real "ale".

Abducted from a pumpkin field, chopped into pieces with a blunt knife, roasted in a scorching hot oven and finally boiled alive...
It could have been the start of a gruesome horror story. Instead, it's just what the pumpkins has to endure to brew our version of a pumpkin ale.
Spiced with the classics: cinnamon, fresh grinded nutmeg, all spice, a hint of fresh ginger and topped of with real vanilla. And to finish it off: lagered on medium toast oak chips soaked in our own BourbRum blend.